A React based emoji picker powered by Interweave and Emojibase. Supports the following features: 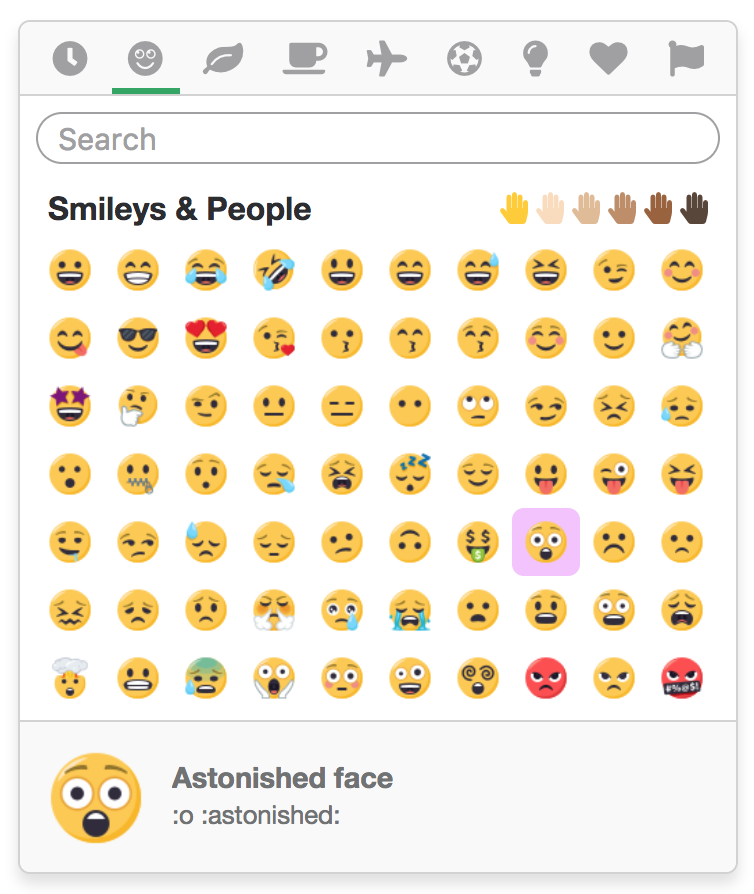 Slack and Twitter themes provided as an example of the library's robustness.

To utilize the emoji picker, import and render the <EmojiPicker /> component. The picker renders in place, so any positioning or display toggling should be done manually.

The sizing and path emoji props are required. View the TypeScript interface for a list of all available props.

Sometimes specific emojis should not be used, like the poop emoji. This can easily be achieved with the blockList prop, which accepts an array of hexcodes.

The inverse, the allowList prop, can be used for situations where a restricted list of emojis should only be used. This also accepts an array of hexcodes.

Not sure where to find a hexcode? Dig around Emojibase.

When an emoji is selected (clicked on), we keep a history known as "commonly used", and display a custom group within the emoji list. This history has two modes, recently used and frequently used, and can be customized with the commonMode prop. Selected emojis that fall past the maxCommonlyUsed prop are trimmed from the history.

The commonly used feature can be disabled with the disableCommonlyUsed prop.

This picker is quite customizable, if not the most customizable, when it comes to its visual appearance. Every aspect of the picker can be changed, whether it be the order of elements, hiding or showing elements, the number of emojis to render, and more. I'll try to keep this rather short.

To change the number of visible emojis rendered in the list, define the columnCount and rowCount props.

By default, the picker renders elements in the following order: emoji being hovered preview at the top, followed by the list of emojis, the search bar, and the group tabs. This order can be changed with the displayOrder prop, which accepts an array of strings.

To hide emoticons or shortcodes within the preview, pass the hideEmoticon or hideShortcodes props. Furthermore, to hide group headers (but still use group tabs), pass hideGroupHeaders.

To customize the icons displayed in the group tabs, pass an object of nodes to the groupIcons (list) prop. By default the picker uses native emoji but can render React components.

The picker is not styled by default as it allows consumers to easily customize the CSS to match their application. There are 2 approaches to styling the picker, the first by writing CSS that follows the class names provided by Interweave.

The second by writing CSS and passing an object of custom class names to the classNames prop. This approach enables non-standard solutions, like CSS modules and CSS-in-JS.

The emojiPadding prop is an exception to the CSS pattern, as it pads the emoji button using inline styles. This is necessary for accurately computing of widths and heights.

Localization is important, and thus, all messages within the picker can be translated with the messages prop. This prop accepts an object of message keys to translated strings. The list of available messages can be found here.